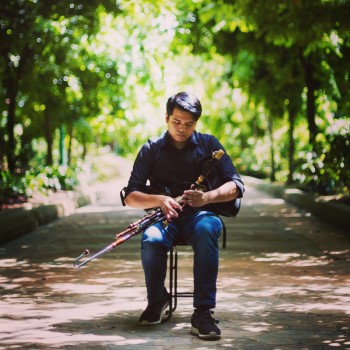 Musician, Producer, ComposerCeltic music has been close to Faliq’s soul ever since he learned the Scottish Bagpipes when he was 13 while studying in high school. Since then, he was heavily exposed to Scottish 'March & Strathspey' Bagpipe music as well as Irish 'Jig & Reel' music and quickly became fascinated with the sound of Uilleann Pipes when listening to James Horner's Braveheart OST and Hymn to the Sea. After graduating from local university in Classical Flute & Jazz Saxophone, he took up the Uilleann Pipes as his primary instrument along with Irish Penny High & Low Whistle.

A self-taught Uilleann Piper, Faliq has been travelling and performing his works extensively at a numerous festivals across the globe such as SXSW 2016 in USA, UK, Peru, Chile, Cyprus and throughout Asia. In July 2018 he attended Willie Clancy Summer School at Miltown Malbay to broaden his piping knowledge and was guided by his Uilleann Piping mentor, Mikie Smyth.

Aside from performing on stage, Faliq actively writes and arrange music for several musical projects and his bands, Faliq Auri Trio (FAT), Diplomats of Drums & The Three Pipers. His Celtic fusion composition titled 'Train to Belfast' was released for F.A.T in 2017 and he has produced 'Joget Dekat Je' & 'Newsuntara' for Diplomats of Drum. Currently, he is working on The Three Pipers debut EP alongside two prominent SJAPB pipemajors, which is also his piping mates since 2005, Amirulpipe and Raja Hizami.