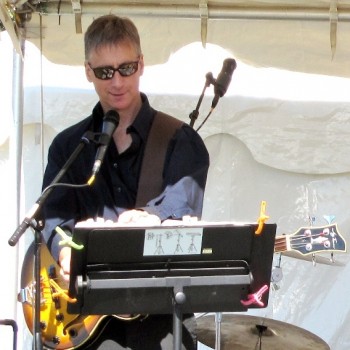 Started out as a lead singer in a rock band in the late 80s. Picked up the bass in 1990 and have played in bands ever since. Started writing songs in 2013 when I was finally in a band that performed all original music. The Dropbox tune I have shared was recorded with that band... that soon after dis-banded. But I continue to write songs and have been making homemade demos of them. I would like to make recordings of a few of them to at least the level of the track I shared via Dropbox.
My songs come in a variety of styles, but tend to have pop rock structures, a clear narrative storyline, and more juicy chords than is typical.
In this venue you could think of me as a Nick Lowe type looking for his Dave Edmunds collaborator. Or perhaps more accurately, a Benjamin Orr (of the Cars) type looking for... hmmm... a Bob Welch or Paul Weller-ish guitarist with production ideas who can stretch from folky to bluesy to rock to jazz. Someone with a love of chords who thinks about textures, tones, and soundscapes more than blistering leads. Plus a versatile drummer to keep it moving.