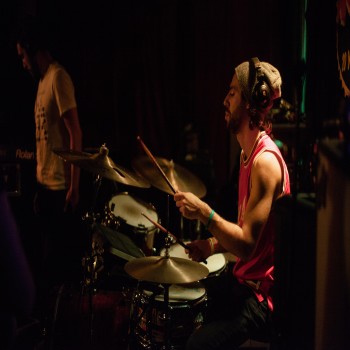 Nate Mondschein has been composing, performing, recording, producing, writing about and obsessing over music for the better part of 29 years, and plans to continue doing so for as long as he possibly can. Based in Western Massachusetts, Nate brings to each of his musical endeavors a passion for emotive performance, a producer's ear for arrangement and detail, and an unending commitment to the pocket.

As a drummer and bassist, Nate has performed and recorded across the northeast with a variety of acts, most notably as bassist and producer with Western Mass Psych-Rock five piece, Old Flame. His work spans a vast array of genres, from Motown to Hip-Hop, Indie-Pop to Jazz, Folk to Future-Soul, and includes frequently collaborating with Spencer H., Josh the Word, Mtali Banda, Sodada and many more.

In addition to his own compositions, Nate has worked as a producer alongside numerous artists, most recently producing Old Flame’s debut full length “Young & In Debt” and vocalist Raycee Jones on the single “On Your Own”

For more examples of Nate's work and collaborations, as well as contact options, swing by NateMondschein.com and give him a shout!